0 made it | 0 reviews | 0 photos
Source: shelovesbiscotti.com 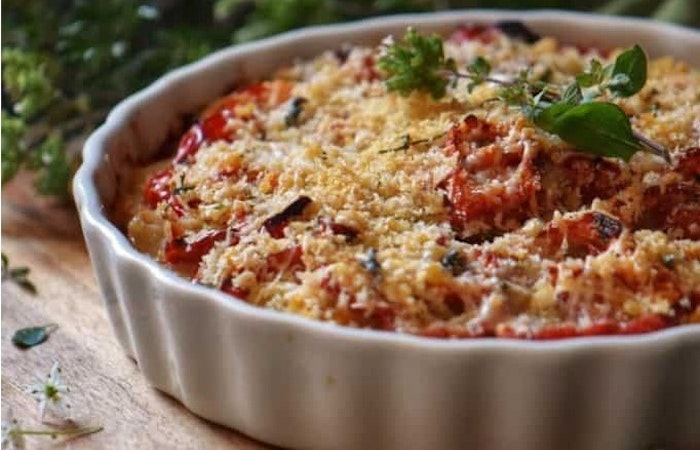 One dish supper is served.

1. Preheat the oven to 200°C and place the oven rack in the middle of the oven.

2. Thinly slice the shallots. Set aside for now.

3. Slice the tomatoes into rounds, about ¼ inch thick. Place in a bowl and season lightly with salt and pepper. Set them aside for now.

4. Heat about 1 tablespoon of olive oil in a heavy saucepan over medium heat.

5. Add the shallots and sauté, stirring occasionally, for about 6-8 minutes or until soft and translucent but not browned.

6. Season with salt and pepper. If using, add a pinch of red pepper flakes.

7. Meanwhile, prepare the oregano marinade by whisk together: 2 tablespoons of olive oil, 1 teaspoon of chopped fresh oregano, ⅛ teaspoon of salt and a pinch of pepper.

8. Peel the potatoes and slice about ⅛ thick. Toss them in the fresh oregano marinade.

9. Drizzle the bottom of a heatproof oven dish (7 inch quiche pan) with 1 tablespoon of olive oil.

10. Use about half the amount of sliced tomatoes to layer the bottom of the oven dish.

11. Sprinkle the tomatoes with the Romano cheese (¼ cup).

12. Arrange the potato slices in a single layer with the edges slightly overlapping each other over the cheese. Use about half the amount.

13. Top with a layer of the sauteed shallots. Use the whole amount.

14. Arrange the rest of the potato slices in a single layer with the edges slightly overlapping each other.

15. Repeat with the rest of the tomato slices but this time layer them so that they overlap.

16. Drizzle the top with 1 tablespoon of olive oil.

18. Carefully remove the casserole from the oven.

19. Sprinkle the top with the rest of the cheese (¾ cup), the fresh oregano ( 1 teaspoon) and the Panko bread crumbs.

20. Bake for another 15-20 minutes or until top is golden brown and potatoes are properly cooked.


No reviews yet! Will you be the first?

how it works
our boxes
shop
recipes
faq
contact